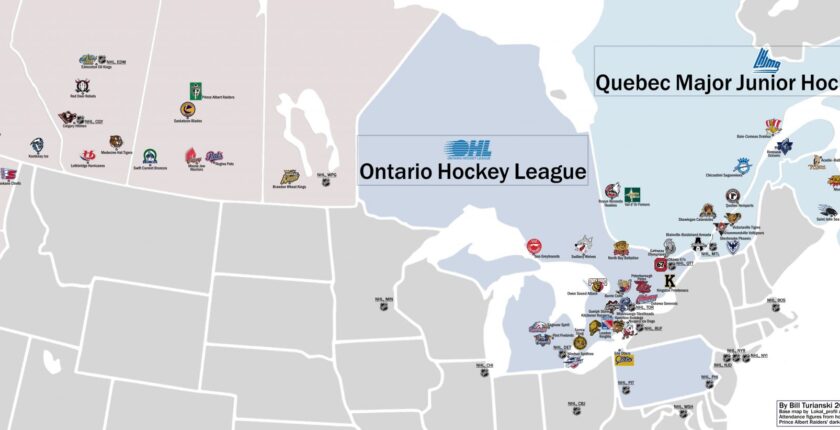 The Probability of Being NHL Drafted in the CHL: What the numbers say…

Done by Mehta Saakshi with the University of British Columbia

The Probability of Being NHL Drafted in the CHL, here’s what the numbers say…

In 2019 NHL Entry draft, 46 forwards and 19 defensemen from CHL were drafted. This shows that, forwards were 2.5 times more likely to be selected than defensemen. Using player-by-player data for junior hockey players eligible for 2019 Entry draft, I examine two important relationship.

Firstly, I analyze what performance statistics are important to predict the probability of an eligible CHL forward to get drafted. Secondly, I look at how this probability varies across players from different years of eligibility. For forwards, the probability of getting drafted to NHL is highest when –

3. Games played is equal to or greater than 60: Forwards who play more games tend to have higher points but it is important to note that the increase in games should be complemented by high goals or assists. If the per game averages decrease, this could send a negative signal to NHL team managers and scouting agents and lower the likelihood of getting drafted. From these findings, it is clear that players with higher performance statistics have a higher probability of being drafted, especially in the first year of their eligibility. Therefore, forwards should leverage their position on ice to accumulate higher points in junior league to secure a position in the dream league. However, these results do not account for other physiological fitness, scouting data and individual differences.

The Full Research Report can be viewed here: Download

The moral of the story, whether a forward or defenseman, for a player to be NHL Drafted from the WHL, OHL or QMJHL it’s critical to 1) play a full season in your first draft year, ideally 60+ games 2) be a difference maker in offensive production; without these thresholds met you are 20-60% less likely to be drafted in your 2nd NHL Draft year when producing the same amount as a 1st year eligible player